You're in Good Hands 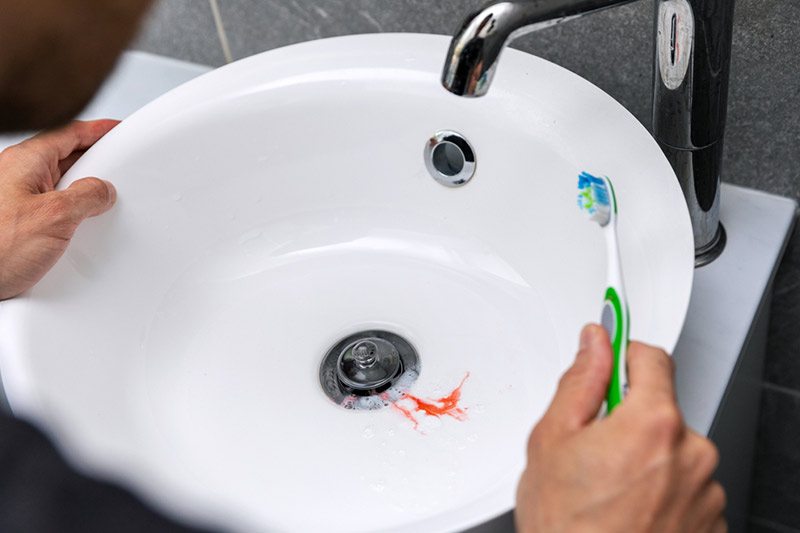 We’ve probably all been there at some point. That moment when you’re brushing (or flossing) and you swish and spit and while you don’t have any pain, you see blood in the sink. You’re probably wondering, well why? How did that happen? Nothing hurts.

Let’s go a bit more in-depth on a few of these causes that could be a factor in your bleeding gums while brushing your teeth.

While expecting your new little one is one of the most exciting times, it can also come with some surprising impact on various parts of your health – dental health being one. Bleeding gums for pregnant women are more common than you may think, particularly in the second and third trimesters. But why?

Why Can Pregnancy Cause Bleeding Gums?

There is a combination of factors at play such as

If the bleeding is excessive and continuous or you have pain, getting in touch with your OBGYN and dentist are the next best steps.

The etymology of the word gingivitis dates back to 1874 and is from Latin gingivae “the gums” (of unknown origin) + -itis “inflammation.”  Fortunately, dentistry has come a long way since the 1800s and we know the causes and treatments to rid the mouth of gingivitis. Think you may have gingivitis? Here are some of the common signs.

Why Does Gingivitis Cause Bleeding Gums?

Why does gingivitis cause your gums to bleed? It’s essentially due to the buildup of plaque which causes your gums to become inflamed aka gingivitis. Plaque is just another name for the buildup of bacteria and other debris that become stuck to your teeth. This buildup of plaque which can turn into tartar is often a result of poor oral hygiene and can indicate that you need to brush and floss and bit more and schedule your next dental appointment.

So next time your gums start to bleed, take a good hard look at your dental hygiene routine, and note areas of improvement. It could be a sign that it’s time to schedule your next dental appointment, too.

As with many over-the-counter and prescription drugs, there are side effects to be mindful of. Blood thinners, like aspirin and Coumadin, for example, reduce the body’s ability to coagulate blood when an injury occurs.

Why Do Blood Thinners Cause Bleeding Gums?

Blood thinners automatically put individuals at greater risk for bruising and increased bleeding. And just like the side effect of increased bleeding that you may experience on other parts of your body with regular bumps and cuts, this issue can certainly happen when it comes to your oral health as well.

However, bleeding should never be prolonged or significant. If it is, it’s time to visit your dental professional and contact the prescriber of your blood thinner medication and tell them about the side effects you’re experiencing.

Using waxed floss, avoiding toothpicks, and using a soft bristle toothbrush can all help to minimize the chance of bleeding gums, especially while taking blood thinners.

Need a Dentist Near You for Bleeding Gums?

Thanks for reading our blog on the Causes of Bleeding Gums When Brushing Teeth. If you’ve been suffering from bleeding gums for an extended period of time, the experts at South Gables Dental are here to help. Make your appointment today at the best dentist in Coral Gables.

All on 4 Dental Implants